I was exploring Netflix a week or so ago when I stumbled on the film Dear Mr. Watterson, a documentary about the famous Calvin and Hobbes artist Bill Watterson. 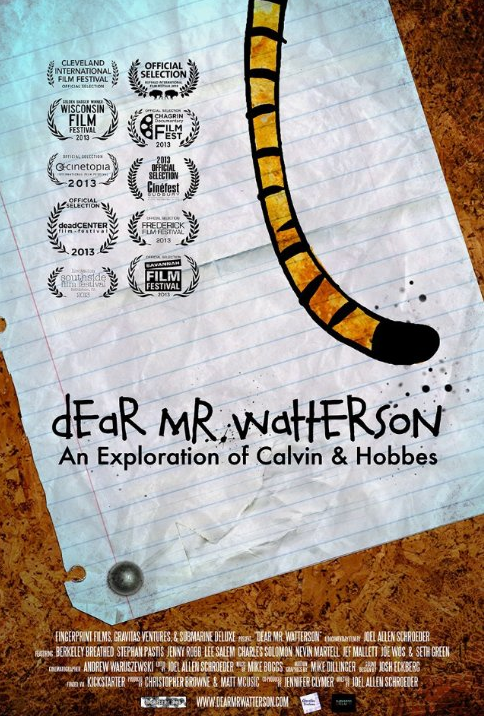 While I am no where near the aficionado of Calvin and Hobbes that many, many other are, I do remember reading the strip in the Portland Press Herald and appreciating both the art and commentary of the characters. I remember the ways in which Calvin would transform his school or his home into a den of monsters or alien planet, and I can remember, at that age, understanding the metaphor, connecting with it. Watterson wrote and drew in the language of youth, and I think that's why he has met with so much success and developed such a passionate following.

Early on in the film, I learned something about Calvin that I had never known before. The very first strip of Calvin and Hobbes was published on November 18th, 1985. That marked the day six-year-old Calvin began his adventure with Hobbes. What makes that interesting to me, is that I also turned six on November 18th, 1985. Technically, Calvin and I are the exact same age, apart from the fact that he's always been six while I've continued to be 25 for years. 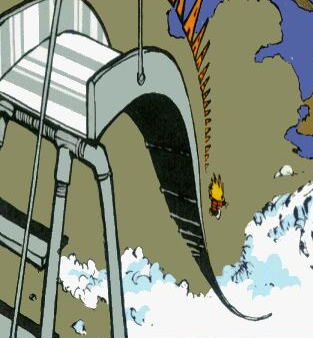 In an interview on NPR, Dear Mr. Watterson director Joel Schroeder talked about how on any given strip of Calvin and Hobbes you could find yourself immersed in a philosophical or theological exploration. For this reason, I think Calvin and Hobbes helped people realize the potential, or the reality of comics.

We've seen it now, of course. When the summer movie season or fall television season is measured by the number of productions based in comic books, it's a clear sign that people are now paying attention to the medium of comics and graphic novels. People have recognized that these are not simple pulp or children's stories. They are as layered and loaded with meaning as any piece of literature, and deserve both attention and credit.

To this day, one of my favorite books that I will read again and again is the graphic novel Watchmen. It is a profound work, and one that challenges the reader to reassess his/her genre expectations. Watchmen is part comic, part novella, part philosophical exploration. It is amazing, and it lead me to explore more graphic novels like The Dark Knight Returns and The Walking Dead series.

This summer, I'm making it point of emphasis for both our writers and teachers that stories are told in the way that best suits the story, not convention. For some stories, that means traditional print. For others, a poem best tells the story, for others a video, or a song, or even a comic.

Calvin reminds us that we need to explore our world to understand it while keeping in mind that not everything is as it seems. To tell a young writer that stories can only be written one way and that some mediums are better than other is to ignore Calvin's advice. As people at a certain age, Calvin and I can reassure you that it's advice worth keeping.
Posted by Unknown at 7:13 PM No comments:

This fall I was invited to participate in the "Central Authors" series at Central Connecticut State University. This series highlights writers from the CCSU family (faculty, staff, and alumni), and gives writers a chance to read and talk with an audience at the CCSU bookstore.

I will be reading on October 1st, 2014. I know it's months away, but if you'd like to come be a part of the audience, I'd truly appreciate it.

Here's the poster for the full Fall lineup for Central Authors.

The CCSU BOOKSTORE, the Offices of the PROVOST and INSTITUTIONAL ADVANCEMENT, and the MEDIA CENTER  present

CCSU’s cable television show featuring members of the Central family (faculty, staff, and alumni) talking about their books
and airing on some 20 cable outlets throughout Connecticut.  (Check your local listings!)

All tapings are at 12:15 PM in the CCSU Bookstore.

Think globally; read locally!
Posted by Unknown at 5:43 AM No comments: