Creative Writing is a class that lends itself to a great deal of flexibility and experimentation. Throughout the year, I like to test run lessons and activities that will eventually find themselves as part of the CCSWP curriculum in the summer. Test runs are important since not all experiments end in success. Sometimes the writing diverges from the expected, and sometimes the directions or the topic stop up the pens altogether. This week, I tried something new, though I know there are a lot of similar variations out there in other CW classes or on writing web pages. I want to share this particular experiment since, in my opinion, it worked.

My focus for the lesson was "voice." "Voice," as a literary concept, is something that I have spent some time conceptualizing for myself. I've since taken that concept and used it in presentations to students and teachers alike. Without going through the entire presentation and explanation, I define voice as such: the unique expression of a common humanity.

For the exercise, I asked students to write three short paragraphs from three separate sentence starters: I was; I am; I will be.

"Define yourself as you were, are, and will be" I told the students. And they did, but I didn't collect what they wrote. I allowed those words to be sacred to them, something I often do.

But then I added a twist. I randomly paired the students and gave them the task of writing the same piece for someone else. They now had to write what their partner was, is, and will be.

"By having a conversation," I answered. "And listening. You are attempting to capture that person's voice, not write an imitation of him or her."

The conversations started slowly, but eventually picked up. Some conversations never matured beyond friendly small talk while others were shockingly honest. Regardless, I was proud of the students for trying especially since many admitted that they were having his/her first ever conversation with his/her partner.

Here are a few samples of what they wrote about each other. I think that in these examples, there is definite voice starting to emerge.

I was alone. I felt like I had no one to relate or talk to. I felt like a freak, like I didn't belong.
I am alive. I don't think that there was a point in my life where I have been happier than I am right now. I'm able to hold my head up and keep it there.
I will be successful. I will travel the world. Discover and re-discover.

I was the guy in the shadows. A seed of a tree yet not growing. A child trying to get his name known by only talking behind closed doors.
I am a seed that has grown its roots out to others, little by little.
I will be a red oak tree, one that stands up high and others look at with amazement.

Posted by Unknown at 9:46 AM No comments:

Here is a writing sample from one of our CCSWP participants. This week's sample is from Kelly C.

I darted through the thick crowds of conversing spirits. Although the spirit world was very spacious, for some reason, everyone seemed to flock in the same places: the park, the judgment hall, and of course, the gate.

Somehow, I managed to not crash into anyone during my sprint to the gate, but as I told my body to stop moving, it turned a deaf ear! I couldn't stop! I tried to stop, I assure you, but I felt like I was on ice. All I was able to do was slip and slide in fruitless attempts to regain control. I barreled right into Mikey, the gatekeeper. He groaned, sounding strangely like a sick walrus.


You can always read student writing samples on our CCSWP wiki: ccswp.wikispaces.com

Posted by Unknown at 6:56 AM No comments:

Registration for the 2014 CCSWP is open and we've already added students to both our creative writing and poetry programs.

This summer, we are offering the following programs at Silas Deane Middle School in Wethersfield, CT.


Students can sign up for one or both of these programs. If you're interested, click the "CCSWP Registration Page" link at the top or right here.

We are also planning of having a second site in New Britain. Details about that to come.

Lastly, I've included our flyer for this year. Feel free to print, send in, and/or distribute this flyer in your community. 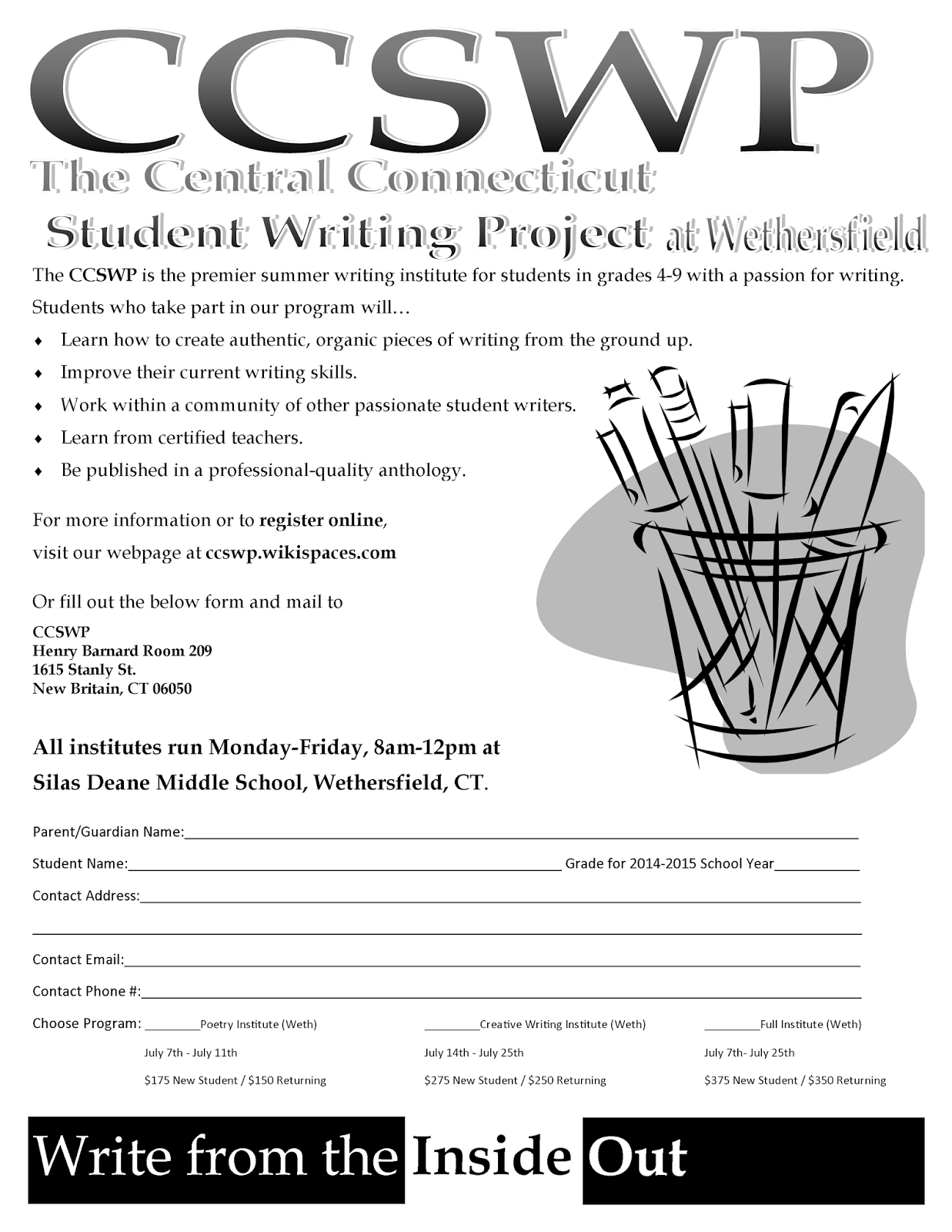 A new webpage for a new year of CCSWP!

It's taken a while, but we finally have our own dedicated space. CCSWP.org will be the new online home of the CCSWP. While we will continue to use the wiki as our online collaborative space, this will be where people will find information, register, read writing samples, and stay up to date with all things CCSWP.

We're a little barren now, but check back often to see what we're up to.

Posted by Unknown at 8:18 PM No comments: